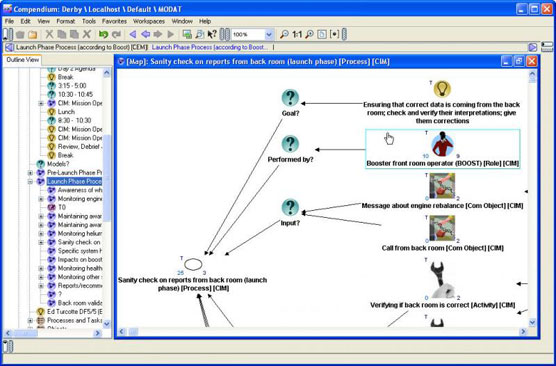 Compendium has a number of historical and conceptual roots, each represented by distinctive research and practitioner communities. We introduce these below, with resource links for further reading.
Computer-Supported Collaborative Argumentation
The world is full of “wicked problems.” Agreeing on what the real problem is requires extensive discussion, as does agreeing on what might constitute a solution. This should ring bells for managers, engineers, lawyers, scientists, policy strategists. Research into techniques and tools to support argumentation has some important contributions to make in understanding and facilitating these processes. At its simplest, argumentation means discourse for persuasion. The precise form which this takes depends on the demands of the particular field and context of use.

CSCA is relevant not only to professionals tackling applied problems, but to scientists and scholars debating theroretical and research issues. Philosophy, Science, the Arts and Humanities involve the construction of perspectives and discourses — debates and argumentation about the nature of problems, the merits of different approaches to answering them, and so forth. Scholarly peer review in journals is a particularly established form of author-reviewer argumentation. Finally, we need to train students to think critically, to understand the different kinds of argument that are used in different fields, and to reflect and debate the strengths and weaknesses of material.
CSCA resource site

Design Rationale
Design Rationale research is concerned with developing effective methods and computer-supported representations for capturing, maintaining and re-using records of why designers have made the decisions they have. The challenge is to make the effort of recording rationale worthwhile and not too onerous for the designer, but sufficiently structured and indexed that it is retrievable and understandable to an outsider trying to understand the design at a later date, and offers computational services that make the effort worthwhile.
A particular approach, which forms one of Compendium’s roots, is argumentation-based design rationale, also called Issue-Based design rationale. Decisions in teams/organisations are invariably made through debate and discussion, but a lot of the effort and reasoning invested is often then lost, or locked in particular individuals’ heads.
Key resources:
The key players in this field, most active from about 1985-95, appear in the book Design Rationale: Concepts, Techniques and Use, amongst them, several people now working with Compendium. (Design Rationale: Concepts, Techniques, and Use. Moran, T. P. & Carroll, J. M. (Eds., 1996). Hillsdale, NJ: Lawrence Erlbaum Associates. ISBN 0-8058-1566-X)
Argumentation-Based Design Rationale research by Simon Buckingham Shum, including a bibliography of relevant publications.